skip to main | skip to sidebar

just a quick update; i've been using my lenovo x60 table with the 2008.1 build of mandriva for several months. in general, it is extremely usable as a laptop and, to a lesser degree, a tablet.
problems:
i cannot get the tablet to autorotate and, while krandr worked fine in mandriva 2007 -- it appears to be broken in 2008.1.
[added note: must be x server issue as xrandr crashes x. hmmmm...]
i also cannot get the x server to recognize the eraser or pen-click/switch.

curiouser and curiouser:
the stylus works -- even after suspend to either memory or disk. even more curiouser (sic), the touchscreen also works with my finger (though, better with my fingernail!). i suspect that the stylus is NOT working via the x server, but rather via 'touchscreen' -- i've got to do some poking around in this regard.

below is a hand-drawn picture from gimp (pen width 3 pts) using the stylus. you can see the jitter .. which i have been unable to change using the details from the linuxwacom faq. 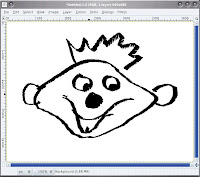 i'm a big fan and overuser of accuchef. that may read a bit strange, as i also predominately use linux as an operating system. to reconcile the fact that there are many highly useful windows-based applications that i enjoy using, i've also been a longtime registered user of codeweaver's crossover office (an wine-based project). designed to run ms.office, cxoffice is also handy for running programs like quicken ... and small, handy applications like ... accuchef! in fact, the recipes i've posted on gfb.log.alt were compiled and reside in my accuchef recipe database.

accuchef runs perfectly under cxoffice, though a small trick is required to update the windows registry to upgrade to the registered (i.e., paid) version of the software. after downloading and installing the shareware version, you will need to download the avsc.exe registration file (following the link that will be emailed to you).